Follow and Subscribe to be one of the first to know the latest news on Andres!
FacebookTwitterYouTubeYelp 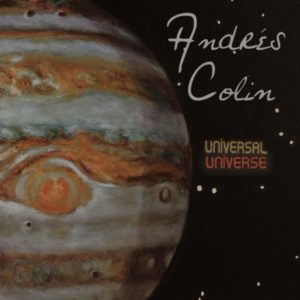 Universal Universe is now available in CdBaby and iTunes.

This record marks a significant departure from Colin’s debut Esta Vida (2007), recorded and released in Mexico, particularly because half the album is composed in English, the other half in Spanish.

Along with Colin’s rich baritone voice, insightful lyrics and multifaceted guitar stylings, Universal Universe includes the talent of more than a dozen guest musicians. The roster includes international recording artists and local favorites, such as violinist Willie Royal (Willie and Lobo, Willie Royal Quartet), Mexican songsmith Miguel Inzunza, vocalist Ari McManus (The Lotus Fire), singer-songwriter Ben Hammond and guitarist Bryan Spainhower. The diverse backgrounds of all the musicians mesh together in a rich fusion of blues, pop, flamenco, reggae … and then some. Written by: Sarah Moone